Get a sense of what cycling in Caledon is all about in VR, and then come and cycle for yourself.

We have some of the best cycling here in York Durham Headwaters. Our picturesque rural roads, forested conservation areas, and provincial and national trails draw cycling enthusiasts from far and wide. But let’s say you aren’t an enthusiast. Not yet, anyway… but you want to be. You want to broaden your horizons, take in new scenery, and fall in love with cycling like so many others have. Or perhaps you want to turn your single ride into an overnight adventure. Where do you go and what do you do to begin your journey? The Town of Caledon has an answer to that. They have developed a virtual reality cycling experience to take you through their community from the safety and security of your phone, tablet or computer. Get a sense of what cycling in Caledon is all about in VR, and then come and cycle for yourself.

You may be tempted to assume that this innovative project was a result of COVID-19, at a time when so many of our attractions and businesses were challenged to adapt to an increasingly online world. But actually, a virtual reality cycling video was something that was in the works well before then. With cycling being hugely popular in Headwaters region, a VR experience like this was just the thing to encourage visitors to become excited about Caledon, and to extend their single ride into a longer trip. “The purpose of the video is to educate our visitors on what else they can do while they are visiting,” says Sharon Wilcox, Tourism and Culture Officer for the Town of Caledon. “Stay in an accommodation and cycle at your leisure, cycle from farm to farm or hamlet to hamlet with confidence, and get to know where cycle-friendly shops and businesses are.”

The video begins at the intersection of Escarpment Side Road and Horseshoe Hill Road, and features two cyclists riding hybrid bikes. From this starting point, the cyclists take the viewer through picturesque rural roads, scenic trails, over bridges and even through tunnels. “It’s really cool because they have 360-degree cameras on their helmets and on the front of their bikes,” Sharon explains. “Because the videographers go back and forth between the different footage, you feel like you’re riding with them along the road.” Also, because the video is 360-degrees and virtual reality, the viewer can pause at any point and look around at the scenery. Use your curser to drag the viewpoint on your screen. Look down and see the bike, up and see the sky, or left and right to see the forests and fields you’re riding past.

As a bonus, the video offers cycling and route trips to visiting cyclists that only the locals know. “A lot of people don’t know that there is a tunnel underneath Highway 10 for cyclists and pedestrians,” Sharon points out as an example. “It’s kind of a best-kept secret around here because you don’t see it if you’re driving past. This is the safest way to cross Highway 10, and we show you this in the video.”

Caledon is, as we mentioned, a favourite destination for cyclists because of its scenic rural roads and trailways. These are ideal for all levels of enthusiasts, whether they are looking for an easy ride or a heart-pumping challenge. Sharon says, “It is quite popular because of the trailways. If you cross from the north-east corner of Caledon all the way to the south-west corner on the trailway, it’s a nice flat, easy surface. That’s really popular for cyclists that don’t want the big challenging hills, and would prefer a leisurely pace.” For those cyclists that do want a challenge, the Niagara Escarpment runs through the town with some very difficult hills. And in the latter part of the video, one of Caledon’s favourite mountain biking destinations is highlighted: Albion Hills Conservation Area.

You will also be introduced to cycle-friendly destinations like Spirit Tree Estate Cidery. In fact, this location is so popular for cyclists that the business had to put two large bicycle racks out front because of how many people would stop for lunch, or for a coffee and pastry on their morning ride. “Apparently the coffee and scones are hugely popular for the early morning cyclists,” Sharon notes with humour.

It is a testament to the enthusiasm of Caledon’s tourism operators for the cycling community that they were so helpful to the town during filming of this VR experience. Clearly, this is a community which embraces its wheeled visitors. “We have great bike shops in the area,” Sharon states. “The owners of one even volunteered to come out and be cyclists. The couple that are riding the roads and trailways are the owners of Lynx and Hare Cycles. They were so great in the way they stepped up.”

With the month of September being cycle month, you will see the Town of Caledon’s virtual reality cycling experience featured in places like York Durham Headwaters and Ontario by Bike. To enjoy this VR video, go to https://www.visitcaledon.ca/en/tourism/Cycling.asp. 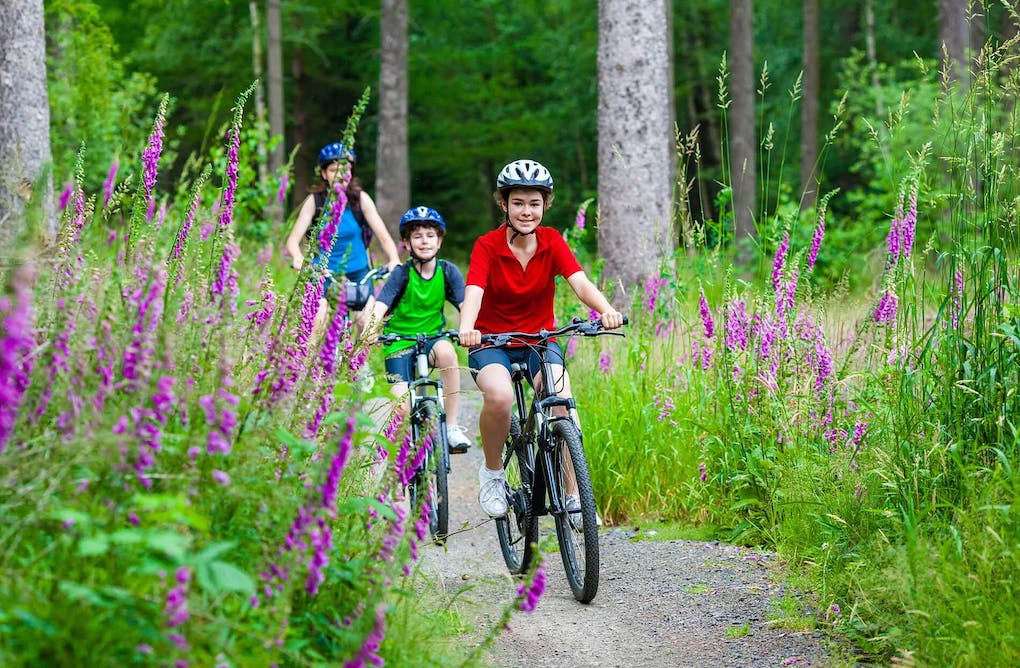 Get Outside and Hike Your Way Across YDH

Whether you’re looking for scenic lake views, quiet forests or beautiful meadows, YDH has you covered! A Passion for Bikes at Lynx and Hare Cycles