This winter, the Ontario ParaSport Games come to Durham Region. Athletes who have epitomized the dream of never being limited by a physical disability will be heading our way to compete and, we hope, experience just a taste of what Durham has to offer. We have tons of delicious dining options that are also wheelchair accessible. Whether you’re a visiting ParaSport athlete, or you’ve just got an athlete-sized zest for culinary mastery, here are just a few accessible establishments to whet your appetite.

With chain steakhouses dominating just about every major city, you are fairly certain to be able to go anywhere in the country and get the same thing each time. The same entrees; the same sides; the same cocktails… even the same restaurant supplier trucking the same food. That’s why we love Wildfire Steakhouse in Oshawa. In its five years being open, this independent establishment has proven that even with a gargantuan chain steakhouse down the road, it has what it takes to please even the most discerning of palates.

“The restaurant is very popular,” says Patti Demoe, general manager. “We get a lot of repeat business and are starting to know our regulars. But there are a lot of new faces, too, so I feel like we haven’t even hit our peak yet.”

Wildfire’s steaks are aged a minimum of 40 days to enhance tenderness and flavour, and are seasoned with an in-house blend of spices and herbs. But with a varied menu, Wildfire has something that will please everyone’s tastes. To name just a few menu options, there is the whiskey barbecue burger, the sesame-crusted and seared Ahi tuna, the citrus grilled salmon and the butternut squash ravioli.

It is an attention to detail and a flexibility to change it up on a whim that makes Wildfire stand out from its franchise competition. “Everything’s made fresh,” Patti says. “Our soups are made from scratch, and our roasted potatoes go into the oven every day. I think that sets us apart from the chains.”

Its location may be unassuming, but nestled into a strip of shops in the suburban neighbourhood of Courtice is a hidden gem: Bistro 238. Owner and head chef Simon Bush, as humble a restauranteur as one could imagine, has trained throughout Britain, France and Spain and, in Canada, with Toronto’s famed Oliver and Bonacini Hospitality Group. We probably don’t need to say more to recommend this ambitious little bistro… but we will.

“What is on the plate is prepared with care and attention, so it ends up being a better dish than one piled high with so many ingredients that it becomes muddled,” Chef Simon says.  “In the end, you don’t know what you’ve eaten because there’s just too much going on.”

The menu has all of your bistro favourites. Starters like melted brie, sweet onion confit and roasted pear crostini are sure to get you in the mood for mains like local, pan-roasted chicken breast or linguine with black tiger shrimp.

What makes Bistro 238 extra special is that it’s not just about the mains. It’s all about quality and letting the food speak for itself. As much care and attention is given to the side dishes on the plate. “We concentrate on every aspect of the dish,” Chef Simon says. Each element is given the same amount of time in its preparation and execution.”

If your palate runs to good, old-fashioned pub fare with a modern twist, head over to Copperworks Brew Pub for some local, home-brewed goodness.

Located in historic downtown Bowmanville, in a building which was constructed in 1822, “Copperworks is part old-world pub and part live-music venue with a dash of hip brewery thrown in,” reports Sarah Walker of Durham Region’s East of the City Magazine. The building, which was in need of a little TLC when it was purchased, has been lovingly rejuvenated by co-owner Patrick Burton, who tapped into his contracting background to give Copperworks its homey atmosphere.

Today, Copperworks is a small-town favourite. Locals who know and love this quaint spot, tucked away from the main street, have come to expect the pub’s signature freshness and quality. And true to the brew pub ideal, the establishment brews its own beers onsite in small batches. With live music every weekend, Copperworks Brew Pub is a true, small-town, home-away-from-home.

“I am the way I am because my dad was such a dreamer. And I named my dream after him.” So says Chef Andrea Nicholson, owner of Butchie’s in Whitby.

You might recognize Chef Andrea, who is our own home-grown celebrity. She has appeared on Food Network Canada as a host on Restaurant Takeover, as a contestant and then judge on the first and third seasons (respectively) of Top Chef Canada, and as an expert on the Marilyn Denis Show. Needless to say, she knows her stuff.

As the name implies, there’s nothing demure about the menu at Butchie’s. Just look at the sign outside. It’s “Damn Tasty Food.” And you can order your food in endless combinations with Chef Andrea’s unique “meat-plus-three” format. In addition to the proprietary Butchie’s Lager, on tap is an assortment of local craft brews that are well known out here in Durham Region like 5 Paddles Brewing, Little Beasts, Town Brewery and Brock Street.

But what’s best about Butchie’s is that the restaurant is about so much more than just serving great food. It’s about supporting the local community. “We’re a family-focused establishment,” says Chef Andrea. “We are community minded. My goal is to include as much locally grown produce as possible in Butchie’s menu during the growing season.” 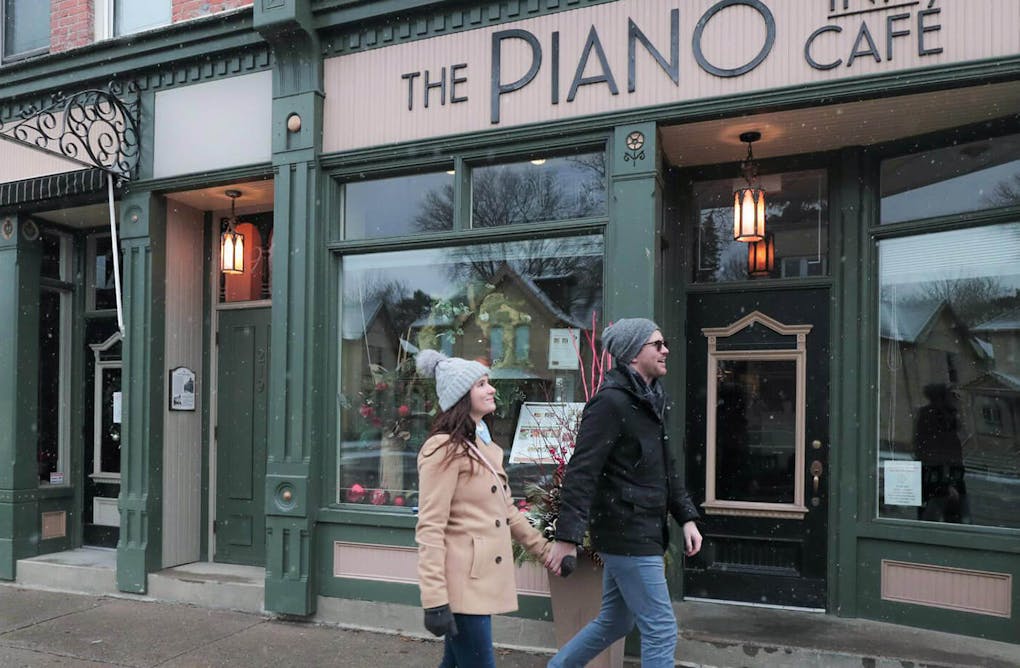 Après All Day in Uxbridge

Durham Region has so much to offer that it will lure even the snowbirds out of hiding.