In all my years on this earth, I’ve yet to encounter a fisherman on the water checking his or her phone. I’ve never heard banter between boats discussing the latest news on Facebook or Instagram. I’ve never seen anybody looking antsy, and being in one place, while quietly wishing they were in another.

Fishing, in many ways, is the antithesis of our current “culture of connectedness.” On the water, the only thing people seem worried about is being connected to nature, with the understanding that sometimes as human beings, we owe it to ourselves to spend a few hours with our phones off and our senses on.

As a child, I spent my summers up at Christie Lake near Lanark County. It was where I felt most “me.” As spring arrived, the classroom always felt like a cage, and the gentle breeze coming in the window was calling my name. When we got there, we’d often take the boat out, each with our respective fishing rod. I can barely remember if we ever caught a fish, but I can still hear the gentle lapping waves against the side of the boat.

My Uncle John, hailing from Quebec, would often come up to the cottage in the summer, and I’d hear mumblings of his fly fishing adventures. He talked about his yearly fly-fishing trip as if he was talking about heaven itself. It was then, as that child, that I decided I had to try, fly fishing. But, it was only this spring that I finally got the chance. All this time, the Glen Haffy Fly Fishing Club was sitting but an hour away, a well-kept secret that more than lived up to expectations.

I arrived at the Glen Haffy Fly Fishing Club and Nolan Patterson, the Assistant Supervisor of the Glen Haffy Conservation Area, was awaiting me with rods ready and a welcoming smile . He struck me as someone who understood the magic of fly fishing, and couldn’t wait to share it with me.

“It’s about just getting out on the water, relaxing, and enjoying nature,” he noted. “There’s a little bit of a noble aspect to it.”

The Glen Haffy Fly Fishing Club, though not far from Toronto, feels worlds away. They’ve got two tranquil ponds stocked with rainbow trout (as well as some brook trout), five row boats (one per pond), docks, and a picturesque log cabin. When I entered the log cabin, I was struck by the fact that it had that perfect woodsy smell to it. I could still smell the roaring fireplace from the week prior, when they had their season opening party. I could see the members sitting on the well-used couches, leafing through fly fishing magazines, eating donuts, and sharing secrets that I’m sure some people would pay a lot of money for.

It quickly became clear there was some learning to do before I hit the water. Nolan, filled with humility, exclaimed, “I’ve been at it for five years, but it’s still pretty new to me. There’s so much to learn.”

He brought out two rods, a four-piece rod and a two-piece rod. One rod was adorned with a fly that was more prone to sinking called a “wooly bugger”, while the other had a dry fly, which stays on top of the water. He explained the three parts of the line, and then he taught me the “back cast,” followed by the “roll cast.” I can’t say I thrived at either, but, on the occasion that I did it somewhat correctly, I instantly understood the allure.

Before we headed out on the water, Nolan showed me his dad’s old fly box in which he seemed to have a fly for every occasion. I could see that much of his passion for fly fishing was tied to his memories of learning the craft, and all those special, uninterrupted moments he spent with his dad, not terribly unlike my own memories with my family. “He wanted to take me out and teach me the ropes,” Nolan said excitedly, “and, of course, I jumped at the opportunity to go fishing with my dad. He taught me everything I know.”

When we’d taken the rowboat out, and were casting our lines and enjoying the cool breeze, I looked over at the two other boats on the lake. Certainly, their technique was far superior to mine, but it wasn’t the technique I was noticing. I was imagining their fathers teaching them, and these gentlemen passing on what they know to their kids. I got the sense that these guys wouldn’t mind catching a trophy fish but, at the end of the day, it wasn’t about that. If they didn’t have a nibble all day, I’m sure they’d still be perfectly content.

The Glen Haffy Fly Fishing Club is a whole community that I didn’t know about. I love the idea that every member gets a key, and comes and goes as they please. And, if they’re lucky, (and Nolan tells me they usually are), they get to bring home a rainbow trout for dinner.

I asked Nolan where his journey into fly fishing started. “I learned here. Starting at a location like this is perfect because we’ve got nice calm waters, and it’s an enclosed area with privacy.” He followed that up with the ideal accidental pun. “Once you get a few good casts, you’re hooked!”

The Glen Haffy Fishing Club isn’t big or fancy, and it doesn’t have a particular glamour or glitz, but that, it seems to me, is the point. It’s a place to get away from the rest of the world, where that stuff might matter, and to take a deep breath, and enjoy nature.

It’s a place to put your arm around your child’s shoulder and teach them that life isn’t about catching a trophy fish, it’s about patiently casting again and again, and knowing that, regardless of the result, there’s no better place to pass the time.

Keep in mind that due to COVID-19 precautions, some of the activities may not be fully available, as well, you may need to purchase tickets online – make sure you check the locations website for more information to ensure a safe visit for all. 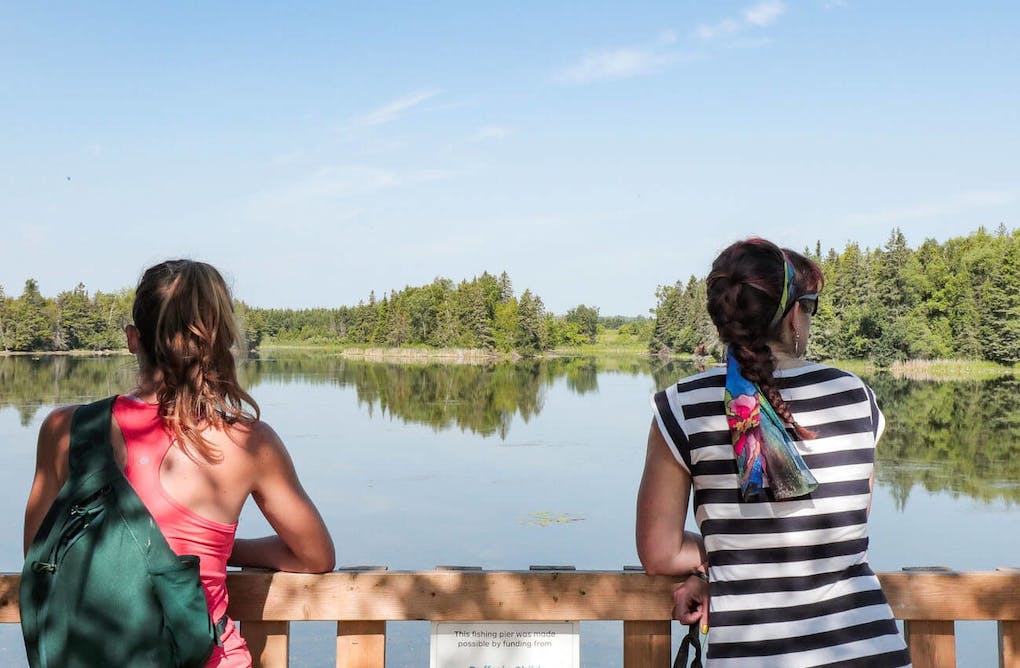 Get Road Trip Ready: How to Prepare for Your Summer Adventure in YDH