Meet the Maker: Behind the Scenes at Caledon Hills Brewing

This family-owned brewery has been in operation for over four years, providing craft favourites to LCBOs and Beer Stores all over Central Ontario.

York Durham Headwaters is fast becoming a mecca for craft beer lovers. Go on, challenge us to defend that statement. We’ve got a list as long as your arm of enthusiastic and creative breweries in our region that are striking out on their own to produce local flavours, seasonal favourites and one-of-a-kind small batch creations you won’t find anywhere else in the world. We’re proud of our craft breweries and the way they’ve been able to dominate this growing niche market. The people behind these renegade breweries are even more amazing than the lagers, porters, stouts, ales, sours and fusion brews they bring to life.

Welcome to Headwaters, home of Caledon Hills Brewing Company. This family-owned brewery has been in operation for over four years, providing craft favourites to LCBOs and Beer Stores all over Central Ontario.

Monica Riedelsheimer and her husband Stefan own Caledon Hills Brewing, and their pedigree in the brewing world is quite impressive. Brewmaster Stefan trained in Bavaria, Germany… which is located in one of the most internationally renowned brewing regions, and holds to its credit beloved variations like pilsner, lager and hefeweizen. Before turning his efforts to his own venture in Caledon, Stefan was involved in building micro-breweries all over the world. “In Asia, in Eastern Europe—he’s been just about everywhere building breweries,” Monica says. “Then we decided to open up our own. Since he’s been designing them all over the world, we thought, why not do one for ourselves?”

The original location of Caledon Hills Brewing Company is a manufacturing facility on a farm in Caledon. It is from this facility that all of the company’s commercial brewing and canning is done, as this was initially Caledon Hills’ sole business model. “Everything gets done on site,” Monica says. “Nothing is sent out or shipped in. That’s important, for our customers to know that everything is made on the premises.”

This hands-on approach to brewing proved successful, and recently the Riedelsheimers have expanded their operation by opening up their first brew pub in Palgrave. Today, customers are invited to enjoy Caledon Hills favourites in the biergarten of its new brewing location—in an old church built in 1882 (talk about atmosphere!). From here, a modest brewing system produces small batch beers which are only available from the pub itself.

There are lots of benefits to brewing in small batches, but here is the best part: it allows Brewmaster Stefan the flexibility to change up his recipes. “Each beer that we bring out tastes so different, so he can be very creative,” Monica says. “Right now, he is doing a mango seltzer. He’s able to use locally grown hops to make different types of beer in smaller batches because it’s hard to do that sort of thing in larger quantities.”

In fact, supporting local hops companies is something Caledon Hills tries to do as much as possible. And Caledon Hills is proud that is beer relies on only four base ingredients. Monica points out that if you are concerned about your health and what you are putting into your body, then you can feel good about knowing exactly what is in Caledon Hills craft beer. “It definitely doesn’t have the shelf life that the commercial stuff has, but it’s good and fresh,” she says. “Our beer is being produced weekly and monthly, so it’s super fresh. Everything we use is natural.”

If you haven’t tried craft beer yet, you need to get on board. The flavours are unique, but there are also varieties that are similar to the popular and ubiquitous name brands, so you don’t have to be adventurous to venture into craft beer. Monica says, “Some people tell me they only want Coors—that’s all they drink. To that we say, just try it. And 99 percent of the time, they absolutely love it!”

By exploring craft breweries like Caledon Hills, you can feel good about knowing you support local industry and local economy. And to make it even easier for you to support local, the team at Caledon hills offers home deliveries to locations within a whopping 70-kilometre radius of their facility! The Riedelsheimers and their team even do their own deliveries to LCBOs, Beer Stores and restaurants, which is quite a lot of work for the small company. The whole family is in on the business—Monica and Stefan have two sons who have now graduated university and are working with their parents. “That’s amazing to have them as part of the business,” she says. “They’ve helped us basically pivot through the whole [COVID-19] pandemic. The have a lot of new ideas—that’s why you always need youth.”

The summer is heating up, so you’re going to want something cold and refreshing to enjoy this season. Make a trip to Palgrave to Caledon Hills Brewing’s new brew pub and taste what Brewmaster Stefan has on tap. Whatever your preference, there is a craft flavour waiting that we’re sure you’re going to love. 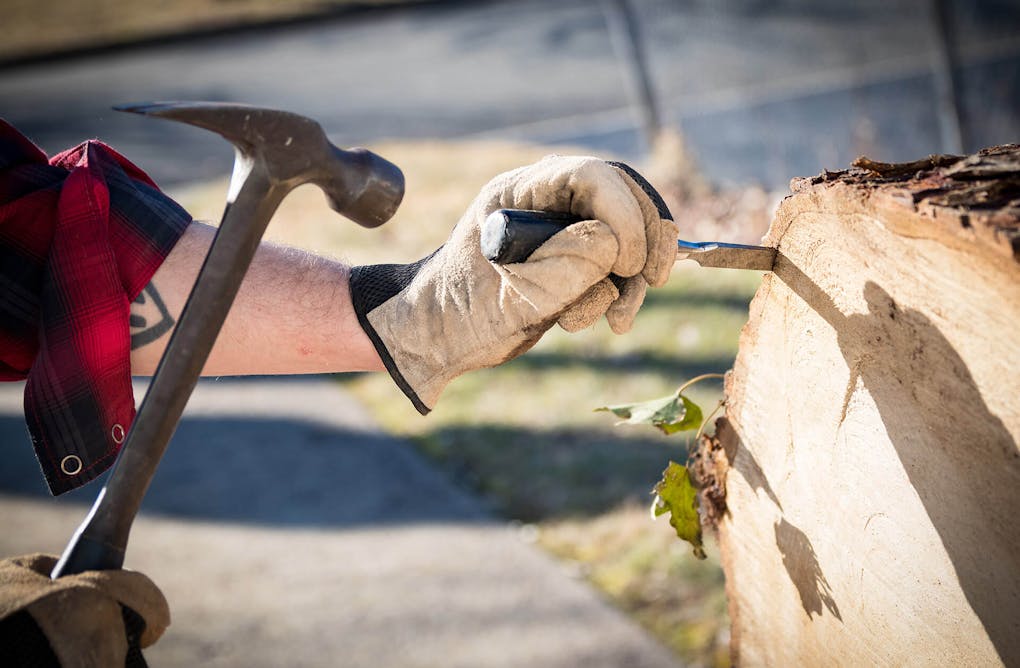 Croissants, pain au chocolate, viennoiserie, handcrafted breads—Bistro DuPain is the essence of Paris in the heart of Erin.